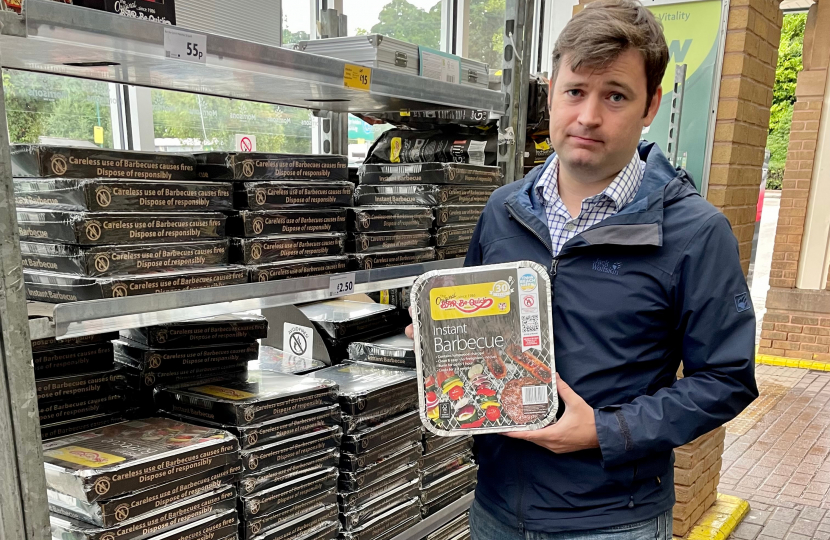 High Peak MP Robert Largan has welcomed the decision by Aldi to permanently remove disposable BBQs from sale in their stores nationwide.

Aldi has three stores across the High Peak, in Glossop, Buxton, and Chapel-en-le-Frith.

Moorland is particularly susceptible to wildfires, given its dense undergrowth. Warm, dry weather exacerbates this tendency.
Last year, two major wildfires were caused by disposable barbecues in High Peak, destroying hectares of farmland, and environmentally significant peatland.
Robert Largan MP is progressing a Private Members’ Bill through Parliament to prohibit the use of disposable barbecues on open moorland and give local authorities the power to ban the sale of them in their area.

Working closely with the Peak District National Park, Robert is also helping to educate people coming into the area about the risks and has encouraged several other local shops to stop selling disposable BBQs.

The New Forest and Peak District National Park Authorities have banned the use of disposable barbecues within their boundaries and called for local retailers to stop their sale.

The Co-op has also removed displays of disposable barbecues in 130 of its stores that border national parks.

In response to Robert Largan MP’s representations, a spokesperson for Aldi said:

“I am writing to provide an update on behalf of Aldi following your previous correspondence regarding the sale of disposable barbeques on 22 June 2021, and your subsequent Private Members’ Bill.

“The health and safety of all is of paramount importance to Aldi, as well as protecting the local environment. We have estimated that by no longer selling disposable barbeques, Aldi will eliminate approximately 35 tonnes of throw away disposable barbecue material.”

“I am delighted that Aldi has decided to remove disposable BBQs from sale in their stores. I care deeply about the environment. Disposable BBQs have proved to be a severe fire hazard, especially in the Peak District National Park.

“Having introduced my cross-party Disposable Barbecues Bill to Parliament, I welcome this further progress to reduce the risk of wildfire and encourage all local and national retailers to follow their lead.”