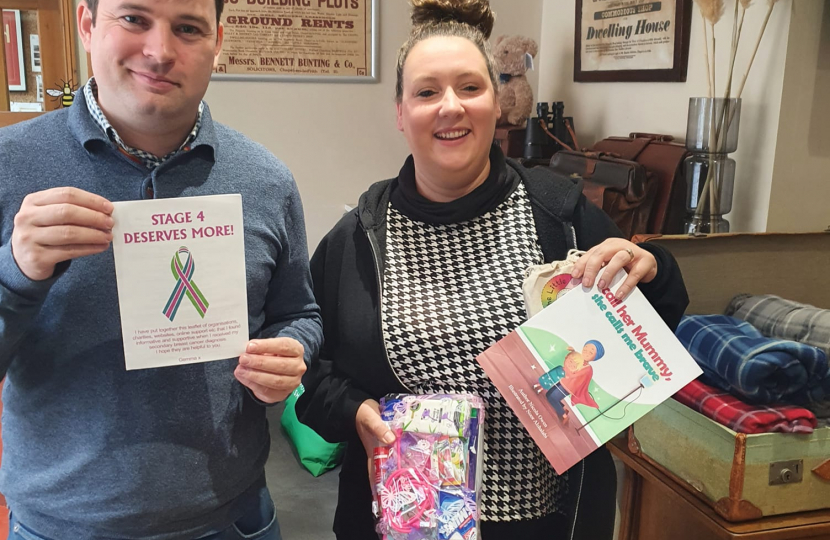 Local MP Robert Largan has called on the Government to ramp up the funding for secondary breast cancer research, which has a survival rate of just 22 per cent.

Recently Mr Largan praised the work of Gemma Ellis, from Chapel-en-le-Frith, in Parliament.

Gemma established the charity Stage 4 Deserves More. The charity supplies free support packs to those diagnosed with secondary breast cancer, and funds research into treatment of the disease.

Ms Ellis founded the charity after being diagnosed with breast cancer in February 2017. She is supported by her husband Ben and two children.

Mr Largan asked the Leader of the House of Commons:

The Leader of the House of Commons, the Rt Hon Mark Spencer MP, replied:

“I join my hon. Friend in commending the work of Gemma Ellis. The Government have invested over £52 million to develop the next generation of cancer and diagnostics specialists over the next two years. A new 10-year cancer plan is due to be published in the summer. I will raise his comments directly with the Health Secretary, but he has the opportunity to do that himself on 14 June at Health questions.”

This follows Mr Largan’s long-running campaign to restore the mobile breast cancer screening unit serving the High Peak, following its withdrawal in 2020 due to Covid-19.

This meant local women were asked to travel to Bakewell or Chesterfield instead to receive a mammogram. The extra distance meant that many women would be unable to make their appointment.

In September 2020, High Peak MP Robert Largan launched a petition calling for the mobile screening unit to be reinstated, which over 2,000 local people signed.

Mr Largan also led a debate in Parliament to make the case directly to the Health Minister, and secured a public commitment that the mobile breast cancer screening unit would be brought back to the High Peak at the request of the Government by July 2021.

North Derbyshire Breast Screening Services are now screening at 160 per cent of their pre-pandemic level, and new mammographers are being recruited.

“Gemma Ellis is an inspiration to us all. I would like to thank her for the phenomenal work she has done to raise awareness of secondary breast cancer, and to support those suffering with this awful disease.

“This is an issue close to my heart, having successfully campaigned to get the mobile breast cancer screening unit reinstated to the High Peak.

“We’ve come a long way on breast cancer research, treatment and survival rates. But more can—and must—be done to give hope to the thousands of women like Gemma.”