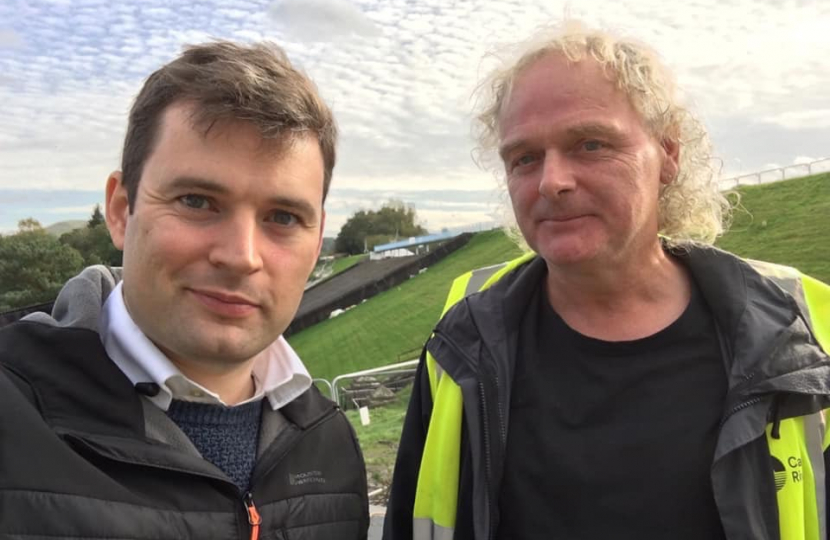 Last week in Parliament, High Peak MP Robert Largan questioned the Government’s progress in addressing the failures that led to the collapse of Toddbrook Reservoir’s spillway, which caused 1,500 residents in Whaley Bridge to be evacuated in 2019.

Following the disaster, the then-Secretary of State for Environment, Food and Rural Affairs, the Rt Hon Theresa Villiers MP, ordered an independent review into the failure. Professor David Balmforth of Imperial College led the review, published in February 2020, which set out 22 recommendations to improve the safety of reservoirs.

The report found that most likely cause of the failure at Toddbrook was its “poor design” and that this was “exacerbated by intermittent maintenance over the years which would have caused the spillway to deteriorate”.

In March 2020, the Government accepted all of Professor Balmforth’s recommendations.

“I welcome the Government’s commitment to improving flood defences. I pay tribute to the work of Councillor Chris Sizeland, who has been working with me and local residents to tackle flooding around Chinley and Whitehough. In 2019 the town of Whaley Bridge was evacuated following a structural failure in the dam wall of Toddbrook reservoir. I am pleased to report to the House that the construction on the £16 million restoration of the reservoir is due to start next month. Will the Minister update the House on progress in implementing the recommendations of the Balmforth report on that incident so that we can get the tougher oversight needed to ensure that such incidents never happen again?”

“We all remember that event well, and I am pleased to hear my hon. Friend’s report that the reservoir has been made safe. Works were completed in 2019 and the long-term plan is under way. Actions to address 15 of the 22 recommendations made in the independent review after the incident are complete. In order to address the remaining recommendations, the Environment Agency will shortly publish guidance for reservoir owners.”

“I warmly welcome the good progress the Government has made in addressing the failures that led to the evacuation of Whaley Bridge in 2019.

“It’s vital that we not only restore the reservoir, but that we also make lasting improvements for the generations to come. We cannot afford to repeat the mistakes of the past.”