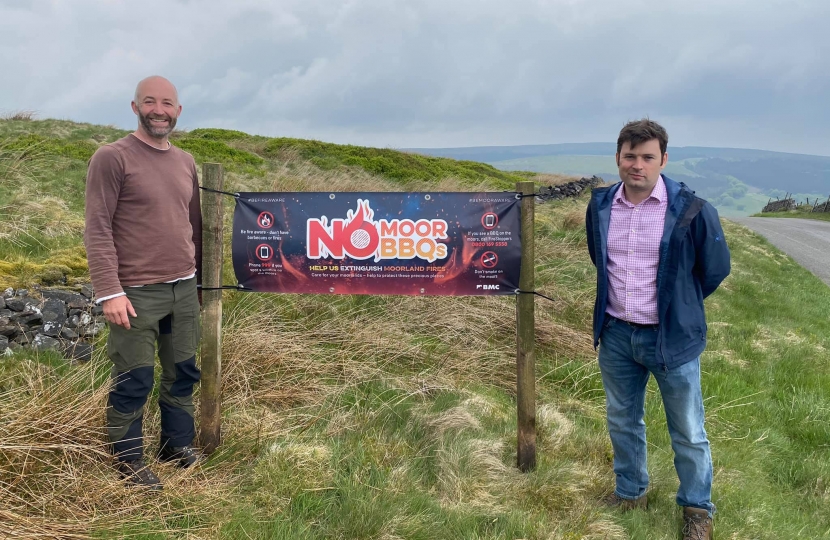 Robert Largan, MP for High Peak, has prepared a Ten Minute Rule Bill entitled ‘The Disposable Barbecues Bill’, which passed its first reading in the House of Commons today.

The Bill would prohibit the use of disposable barbecues on open moorland, and give local authorities the power to ban their sale.

Moorland is particularly susceptible to wildfires, given its dense undergrowth. Warm, dry weather exacerbates this tendency.

In 2019, a fire on Marsden Moor, near Huddersfield, raged for four days and damaged over 700 hectares of moorland. A similar fire in April 2021 caused an estimated £200,000 worth of damage. This damage will take hundreds—if not thousands—of years to repair, with peat accumulating at a rate of around a millimetre per year.

Two major wildfires have been caused by disposable barbecues in the High Peak this year alone, destroying hectares of farmland, and environmentally significant peatland.

Wet, healthy peatland can act as a nature-based solution to tackle climate change, as peat soils absorb and trap carbon dioxide (CO2). In regulating the flow of ground water, peatland also reduces the risks of flooding and drought.

Dry, neglected bogs, however, are a large source of global carbon emissions as CO2 oxidises and is released into the atmosphere.

In recognition of the importance of healthy peatland to offset the effects of climate change, at COP26 the United Nations Environment Programme and the International Union for the Conservation of Nature have been working to create a global peatland restoration programme.

Ahead of COP26, the Government launched the England Peat Action Plan, which sets out a plan to restore, sustainably manage, and protect peatland.

The Government’s Nature for Climate Fund will also be increased to £750 million by 2024–25 with the aim of restoring 35,000 hectares of peatland across England.

The Countryside Code already sets out an expectation that visitors should only barbecue where it has been deemed safe to do so. This guidance is communicated by signs placed near popular visitor sites, although no law enforces this advice.

In response, many have already begun to act.

The National Fire Chiefs Council, Greater Manchester Fire Service, the Moorland Association, Moors for the Future, and the National Trust, among others, have all warned of the danger that disposable barbecues present, and have called for tougher regulations on their use.

“I warmly welcome the cross-party support that my Disposable Barbecues Bill has received already.

“The reckless use of disposable barbecues is a major concern for my constituents in the High Peak, and moorland communities across the country.

“Countless local sheep farmers have conveyed to me the pain they have experienced when clearing up the charred remains of their beloved and economically vital livestock. This cannot be allowed to continue.

“I am confident that this Bill works to protect local communities across the country which are faced with the threat of wildfires every year; hard-pressed farmers’ livelihoods; and our carbon-capturing peatland—key to the fightback against climate change.”