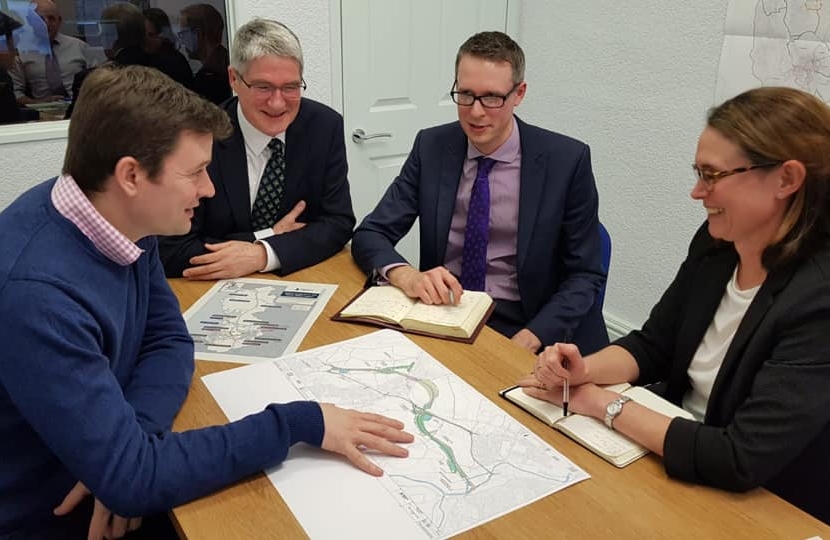 During the meeting, Highways England confirmed that they intend to submit a planning application for the scheme this year and apply for the ‘Development Consent Order’ (DCO) by the end of the year.

With the law giving a statutory time period of 17 months for DCOs, this would mean a start date for construction of Winter 2021/22.

The High Peak MP pressed Highways England on timescales for the bypass, requesting that they do everything they can to submit the DCO as quickly as possible, so that construction can start as soon as possible. He also heard from them about how they will be consulting further with the public about the specific details of the scheme design during the DCO stage.

As well as urging them to get through the legal processes as quickly and thoroughly as they can, Robert also raised with Highways England the severe congestion problems through Tintwistle and the desperate need for ‘phase 2’ of the project, which would extend the bypass around Tintwistle.

Robert Largan MP, who lives on the main road in Glossop, said:

“It was good to meet Highways England and receive confirmation of their intended timescales for the project.

“The bypass has been repeatedly promised for decades and we’ve seen the scheme collapse before so there is rightly a lot of scepticism from local residents. I will keep pushing both Highways England and the Government until we get the bypass built.

“I’m also continuing to push for phase two of the bypass for Tintwistle, which is badly needed for the village.”