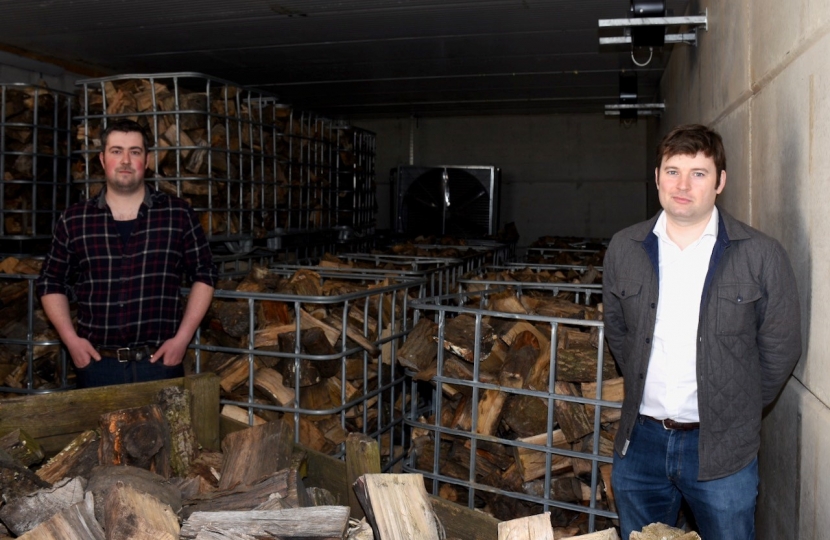 In 2018 Luke and Joanne Johnson’s log business, based at Heath Farm, Smalldale, suffered a catastrophic fire that destroyed their kiln and most of the buildings they were using to produce and package kiln-dried logs.

Overnight, the business went from being a busy family business, supplying local customers with locally sourced timber, to one whose future was suddenly in doubt.

Not only did the fire jeopardise the future of the logging business, but it was also a significant setback for the couple’s plans to diversify into sheep farming.

Without a kiln, Luke couldn’t dry his logs. Still, he could source seasoned logs so that he could continue to supply his customers and generate income for the logging business and the fledgeling sheep farming operation.

Desperate to secure the future of their business, which was now under threat of an eviction order served by the PDNPA, Luke’s planning consultant applied to invoke Permitted Development rights for the proposed agricultural building.

In December 2019 was sent in, and in early January 2020, Luke and Joanne received a letter from the planning officer refusing their request to invoke Permitted Development rights.

The rejection of the applications had severe implications for the company's future and the family’s income. Without the ability to process logs sold within a 10-mile radius of the village, the couple faced the genuine prospect of having no income. With no income, they would have been unable to continue to maintain their flock of sheep.

With the eviction order threat, Luke and Joanne turned to Robert Largan MP, who had been elected in 2019 to serve the High Peak constituency. They explained their situation when Robert visited the farm, and he agreed to take up their case.

When the new buildings' revised plans were submitted to the PDNPA, Robert—along with over 50 others—wrote to the planning authority to support the application.

The application was deferred to the PDNPA’s planning committee, at which Robert agreed to speak to the members, again, in support of the application.

The planning committee members supported the planning application, subject to various clauses, but the result was that the company’s future was finally secure.

Nearly eight months after planning permission was granted, Robert Largan MP visited the farm to see the new kiln that is now up and running. He also saw some of the 200 lambs that were successfully delivered this season.

“Joanne and I are indebted to Robert and his office for all the support they provided.

“We came very close to losing the business and selling the flock.

“We had jumped through all the planning hoops and were running out of options, so when Robert agreed to take up our case, we felt that, finally, someone was on our side.”

“Luke’s business is precisely the kind of small business that should be promoted and encouraged to stay and grow in the High Peak.

“I enjoyed catching up with Luke, and unexpectedly got the chance to say hello to a new lamb, who sadly was rejected by his mum, so has to be hand-fed.

“Please remember to be extra careful when out in the countryside, and keep dogs on leads when near farm animals.”