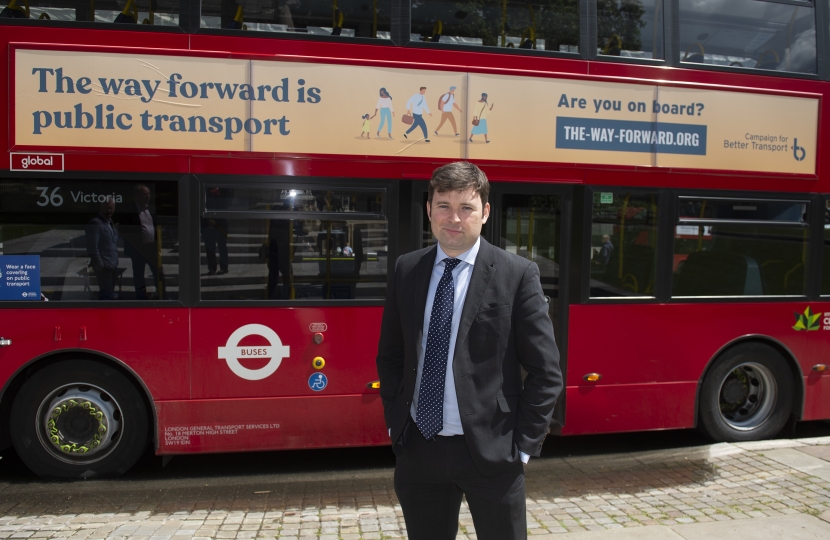 High Peak MP Robert Largan helped launch a national campaign to get people back on board public transport outside the House of Lords in London.

The Way Forward campaign, which has been launched by sustainable transport charity Campaign for Better Transport, is calling on the Government to support public transport by actively encouraging people to use buses, trains, coaches, and trams as restrictions ease, and introducing an incentive scheme to help boost passenger numbers as part of a national plan to place public transport at the heart of a green recovery.

As more workplaces, shops, and businesses reopen in the coming months, campaigners argue it will be crucial that people return to public transport to avoid increased congestion and air pollution, and help communities recover.

To protect public transport services both now and in the long term, and encourage people back on board, The Way Forward campaign is calling on the Government to:

“The pandemic has changed so many things over the past year, especially how we work. But there are lots of people in High Peak who are now returning to workplaces as we gradually leave lockdown.

“We can all use this opportunity to start using public transport so we can reduce our carbon footprint and support vital transport links.”

“The events of the last year have made people less confident about using public transport, but as restrictions continue to ease, we all need to start getting back on board.

“That’s why we’ve launched this campaign to urge the Government to reassure people that public transport is safe again and to introduce a national scheme of discounted fares to encourage people to use it.

“By getting back on board we can all help to reduce congestion, protect the environment and boost the economy in a way that is fair and sustainable.”