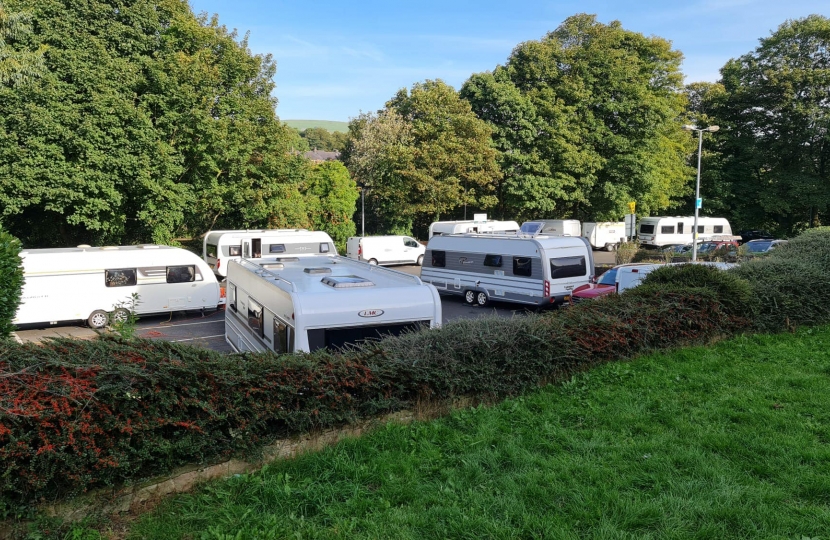 Local MP Robert Largan has been contacted by residents and business owners affected by this encampment, as parking capacity has been significantly reduced for New Mills shoppers, negatively impacting high street trade.

Robert has contacted Derbyshire Police and High Peak Borough Council, asking them to take urgent action so residents and businesses aren’t impacted for much longer.

The Police have visited the site and High Peak Borough Council have now served Noticed on the occupiers requiring them to vacate the site no later than Monday 27 November at 8am, otherwise legal proceedings will be initiated.

The Government is bringing forward new legislation to make unauthorised camps a criminal offence, not just a civil matter. This would allow the police to use the full force of the law in future.

The High Peak MP took further action, raising the issue in the House of Commons today, calling for a debate on the laws on trespass.

“Lots of residents and local businesses have been contacting me about the unauthorised traveller’s site that appears to have been set up on Torr Top Car Park in the centre of New Mills.

“I’ve contacted the Police who have now visited the site and I’ve written to High Peak Borough Council, who own the car park, asking them to take urgent enforcement action.

“In cases like this, taking swift action is essential, so I am glad the Council have listened and taken action so we can prevent the car park from being blocked and avoid any sort of lengthy dispute.

“I hope this gets quickly resolved so residents can use the car park again as soon as possible.”