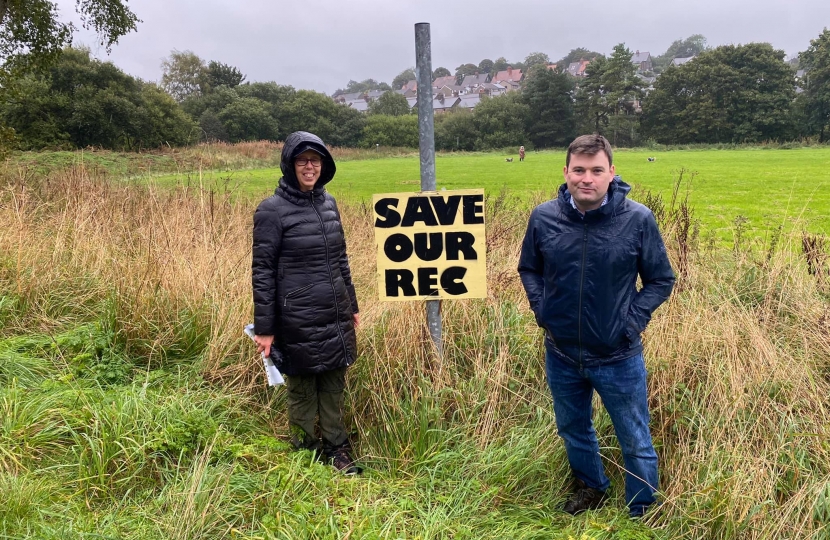 On Saturday, 2 October, local MP Robert Largan joined Jax Palmer and her fellow Save Hogshaw campaigners in Hogshaw Rec, a recreational ground and nature reserve in Buxton, supporting their ongoing campaign to save Hogshaw.

High Peak Borough Council is proposing to sell off Hogshaw for housing development, including Hogshaw Rec, despite the Rec not being identified in the Local Plan for development.

The Council consulted on their proposal earlier this year, and many residents, and Robert, responded to opposing the proposal. The Council is due to publish the consultation results and take a final decision on the future of the site soon.

Robert has highlighted traffic congestion along the A6 corridor as one of the main reasons for opposing the sale of Hogshaw, as recent housing developments across the High Peak are already causing a negative impact on A6 traffic.

Robert, along with his colleagues David Rutley (MP for Macclesfield) and William Wragg (MP for Hazel Grove), brought together High Peak Council, Derbyshire Council, Cheshire East Council and Stockport Council to form an A6 Taskforce to take a joined-up approach to tackling traffic issues.

“I was pleased to join Jax Palmer and Save Hogshaw campaigners recently.

“Many residents and I oppose the Council’s proposals to sell off Hogshaw Rec to developers.

“I’m not against new homes being built, but they need to be in the right places, with the infrastructure in place to cope.

“I’m very concerned about the sheer scale of housebuilding in the area, and the impact on our infrastructure and public services.

“We see a knock-on traffic impact along the A6 corridor, from housebuilding not just in Buxton, but in Dove Holes, Chapel-en-le-Frith, Chinley and Whaley Bridge too.

“I hope High Peak Council listens to local people and makes the right decision on Hogshaw.”