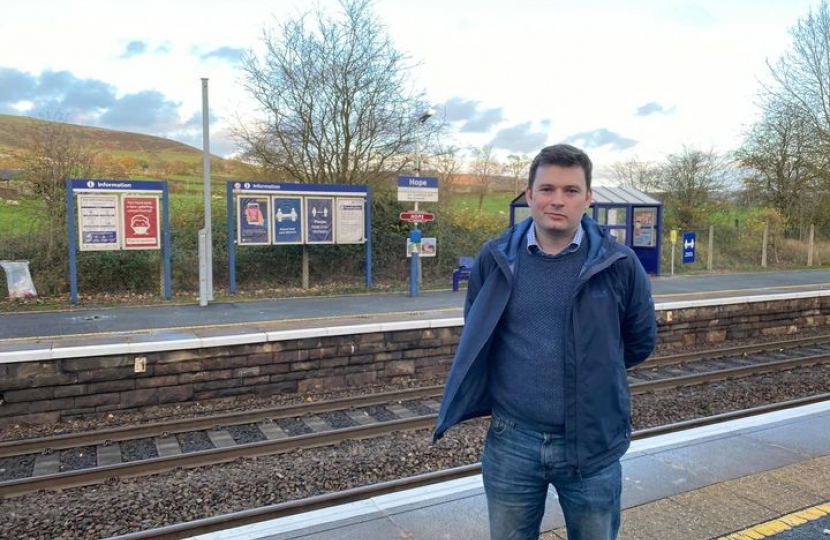 The Government have just published the long-awaited Integrated Rail Plan for the North & Midlands. The plan includes £96billion of funding, representing the most significant investment in railways in the North since Queen Victoria sat on the throne.

Passengers across the North and Midlands will benefit, including Manchester, Sheffield, Leeds, Bradford, Birmingham, Nottingham, Derby, Darlington, Doncaster, Huddersfield and Warrington. The wider economic benefit to the whole region and will be felt for generations to come.

High Peak will benefit directly from this investment in several ways, most crucially in the £137million upgrade of the Hope Valley line, which serves New Mills Central, Chinley, Edale, Hope and Bamford.

Local MP, Robert Largan, who successfully campaigned on a cross-party basis to upgrade the Hope Valley Line, has welcomed this announcement but says he will push for the electrification project and greater investment in High Peak’s transport infrastructure.

The Hope Valley line has also been identified as a potential candidate for electrification by the Traction Decarbonisation Network Strategy.

Work by Network Rail has shown that – if combined with a connection to the HS2 station at Piccadilly – electrification and upgrade of the existing Hope Valley line between Manchester and Sheffield could give a journey time of between 30 and 35 minutes and support up to four trains  per hour (2 via Marple and two via Stockport).

The additional capacity and reliability will also help get HGVs off local roads as more goods will go by rail freight.

You can read the whole plan here: tinyurl.com/55bh9dav

"I have proudly led a cross-party campaign for the upgrade of the Hope Valley Line, so
I am delighted that the Integrated Rail Plan has confirmed this scheme will go ahead.

“I'm also really encouraged that the Hope Valley line has also been identified as a potential candidate for electrification by the Traction Decarbonisation Network Strategy.

“I will be pushing for this electrification - on top of the approved upgrade, as well as continuing to fight for greater investment in transport infrastructure across the High Peak, including on the Glossop and Buxton lines, as well as delivering road improvements for both the A6 corridor and the badly needed Mottram Bypass & Glossop Spur Road.”