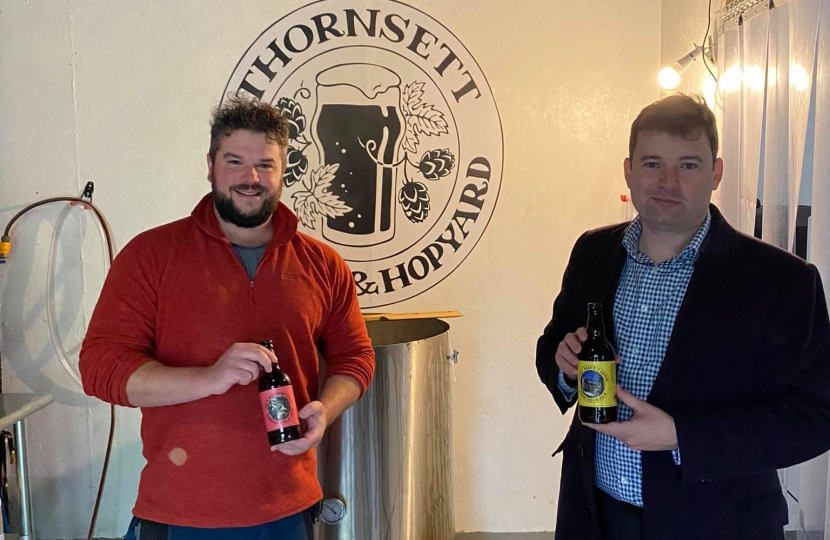 Thornsett Brewery & Hopyard, a micro-brewery based on Thornsett Fields Farm on the outskirts of New Mills, recently welcomed local MP Robert Largan. Paul Medcraft, the brewery founder, gave Robert a tour of his business, and showed how the beer is created from hop to bottle.

Paul Medcraft started his brewing journey in his flat in New Mills. His passion for beer motivated him to create Thornsett Brewery & Hop Yard on his sister & brother-in-law’s dairy farm—Thornsett Fields Farm.

Last year, Paul received planning permission to bring an old, disused hay barn back to life by turning it into his new brewery. This process encouraged him to consider other ways to reduce waste and be as sustainable and eco-friendly as possible.

The brewery is entirely off-grid as it is running solely on a combination of renewable energy sources. Alongside this, all the beers are produced with water from the natural spring which runs through the farm.

Paul has successfully grown his own hops despite the challenging British climate, and is now certified by the British Hop Society as the first organic hop farm in Northern England.

Paul’s pride in the local community inspired him to use a local artist called Clare Allan (clareallanart.com) to bring personal memories of New Mills to life on his beer labels.

Paul has exciting plans for the future of the hop yard, including selling hops to other breweries, homebrewers and florists. You can find his beer available in a lot of local pubs and shops, as well as online at thornsettbrewery.co.uk.

“Thank you for the visit, and I hope you enjoy the beers, Robert.”

“It was great to visit Thornsett Brewery & Hopyard.

“The excellent beer is made by New Mills man Paul Medcraft, using his own locally-grown organic hops and renewable energy.

“Please give Paul’s beer a try if you can, and support another brilliant High Peak business.”