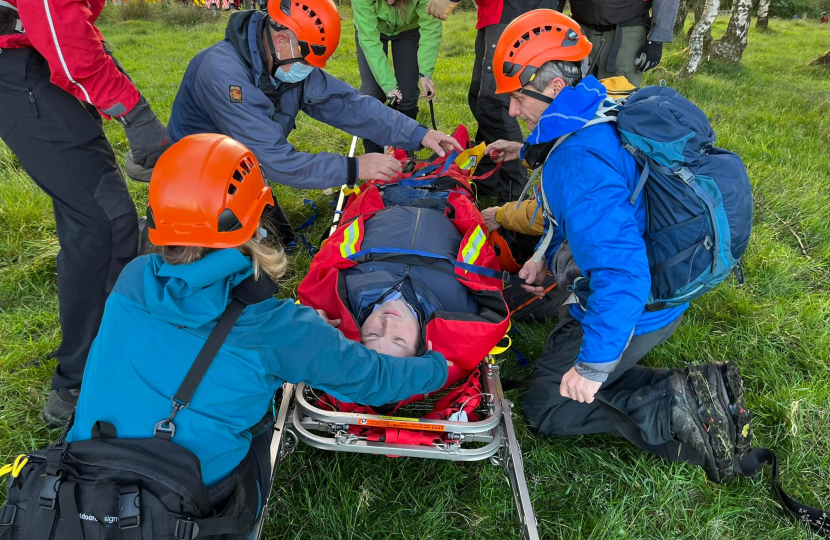 Edale Mountain Rescue Team is a charity, the roots of which go back to just after when Peak District National Park was founded.

Started in 1953 as a group with six whistles, a stretcher, and a basic first aid kit, the charity is now a fully-fledged mountain rescue team with five vehicles, extensive professional equipment, and an instant callout system—a far cry from its origins nearly 70 years ago.

As a charity, many of the team members are doctors or nurses who volunteer in their spare time.

Being on call for two different counties is unique for a mountain rescue team, and it responds to an average of 120 calls a year. Callouts range from fallen walkers, horse riders, and hang gliders, to lost or vulnerable people.

In the exercise, Mr Largan played a casualty who had injured himself whilst walking on rocky terrain. Despite his injuries and the difficult location, he was successfully taken by stretcher to safety by Edale Mountain Rescue Team.

Following the exercise, Mr Largan thanked the Team for all the hard work they do to provide a vital service for our area.

“Whenever I’m out with one of our four local mountain rescue teams, I’m blown away by their professionalism and commitment.

“They are absolutely amazing and do a superb job. It was great to thank them in person tonight!

“The volunteers that make up the Edale Mountain Rescue Team really are a credit to their communities. We are lucky to have such dedicated people in the High Peak.”