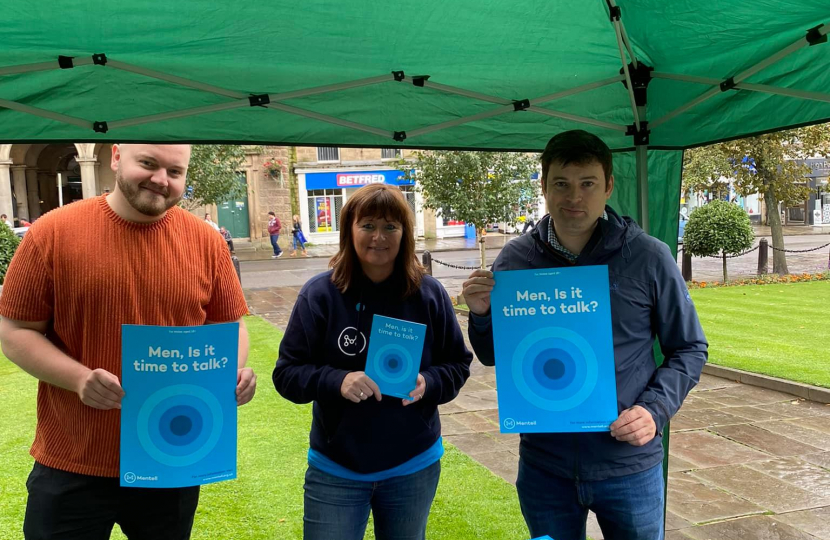 As part of the highly popular Fantasy Premier League competition, Robert Largan MP is setting up a High Peak mini-league to raise money for the men’s mental health charity, Mentell.

The local MP is an avid football fan and Chair of the All-Party Parliamentary Group for Safe Standing, working to introduce of safe standing in Premier League and Championship football grounds. This is part of Mr Largan’s efforts to open up matchdays to more people, including those on lower incomes.

Mentell is a charity that aims to provide mental health support for men. Suicide is still the biggest killer of men under 45 and to combat this, they aim to reduce the stigma that is attached to men talking openly about thoughts and feelings. Mentell provides free, confidential circles for men (18+) to talk in a safe and confidential space, free from advice and judgement.

The fantasy football league will give High Peak residents the chance to compete against each other and their local MP, over the football season.

To take part, residents need to make a minimum donation of £5 to Mentell. They will then be given a code to take part in the High Peak League.

Donations are to be made at: https://www.justgiving.com/fundraising/high-peak-fantasy-football-league

The manager with the most points at the end of the season will be crowned the High Peak Fantasy Football Champion. They will also win a special bottle of House of Commons Whisky.

“Mental Health is an issue close to my heart. Setting up a Fantasy Football League for High Peak residents will be a fun way to raise money and awareness of Mentell’s important work.

“I hope that this fundraising effort can help to challenge the stigma surrounding men’s mental health, while supporting a charity that offers crucial support to those who have suffered in silence for too long.

“I’m also looking forward to taking on my constituents at fantasy football!”

“We’re really pleased to be working with Robert Largan MP on this fundraising initiative. Any funds raised can be used to train new Mentell facilitators to meet the growing demand for our online circles. This will help more men find a safe and confidential space to talk through Mentell.”

“In the UK, every hour, a man takes his own life; the sad statistic is that 100% of all suicides are preventable, and we need more than ever for our communities to look out for one another. It's great to see something accessible for many men (Fantasy Football League) used to promote men's mental health and the work Mentell does throughout the High Peak.”