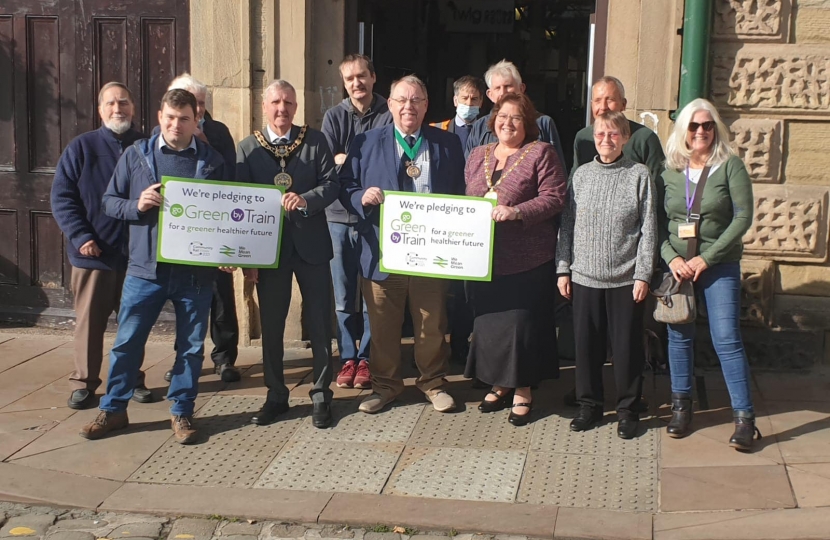 High Peak and Hope Valley Community Rail Partnership are joining other community partnerships and volunteer groups across Britain to spearhead a national campaign highlighting sustainable travel as a critical factor in tackling the climate crisis in the build-up to COP26.

Community Rail Week—organised by Community Rail Network and sponsored by Rail Delivery Group—is the first event in the UK. Hundreds of local partnership projects and volunteers promote green travel by train during 18 – 24 October.

With greener transport now recognised as a fundamental part of the solution to climate change, Community Rail Week—with the tagline ‘Go Green by Train’—looks to drive change at a community level through the efforts of 74 community rail partnerships and over 1,000 station friends’ groups across Britain.

Transport has a huge role to play if the UK reaches its target of reducing greenhouse gas emissions by 100 per cent of 1990 levels, or ‘net zero’, by 2050. Figures show that:

•    Transport is now the largest emitting sector in the UK, making up 27 per cent of domestic emissions in 2019;1
•    Rail accounted for just 1 per cent of domestic transport emissions in 2019, despite representing 10 per cent of the total distance travelled, and is the greenest form of transport after walking and cycling;2,3
•    One train can remove up to 500 cars from our roads;4
•    For a 30-mile journey, travelling by train instead of by car can reduce emissions by up to 86 per cent.5

During Community Rail Week, the High Peak and Hope Valley Community Rail Partnership will be taking to social media to raise awareness of the difference people can make by travelling sustainably by rail.

As part of the week, Community Rail Network has released results of a survey of 1,000 16–24-year-olds, detailing their current travel habits and attitudes to green travel:

•    Seven in ten (70 per cent of) young people are keen to see more people using trains in the future, with the vast majority (90 per cent) saying the environment and climate emergency is an essential issue to them;
•    Around half (48 per cent) travel by train at least once a month, but one in six (17 per cent) have rarely or never been on a train, or can’t remember when they last were;
•    While 94 per cent have a station near enough for them to use, most (67 per cent) admit there are factors are getting in the way of them using trains, including practicalities with walking; cycling, or getting a bus to the station; being worried about cost; or driving or getting lifts being more convenient.

“We are keen to encourage more sustainable travel in this beautiful area of the Peak District.

“The ramblers used to get out to the hills by train, and we’d like to see more and more people leaving their cars at home and travelling in more environmentally friendly ways.

“By getting involved in Community Rail Week, we’ll be highlighting the benefits of train travel for the environment.’

“It was good to join members of Friends of Glossop Station and High Peak and Hope Valley Community Rail Partnership at Glossop Station to promote the Go Green by Train initiative, encouraging people to travel by train into the Peak District.

“Since being elected, a big part of my focus has been on improving local public transport, so it’s good to support this initiative.”

“As we approach the international climate talks in Glasgow, Britain’s community rail movement is coming together to highlight the great importance of green travel at a local and global level.

“Transport is now the most significant contributor of UK greenhouse emissions, so we face a pressing challenge to decarbonise the way we get around, for the sake of future generations – plus our communities can benefit now from reduced traffic and pollution.

“Rail, combined with buses, walking, cycling, and shared mobility, provides a considerable part of the solution: shifting as many journeys as we can onto these modes, and reducing private car use, can help us forge a more sustainable, healthy, inclusive future.

“We’re excited to launch our first Community Rail Week with events and activities in communities across Britain, raising awareness and exploring how we can enable and empower more people to feel confident and able to go green by train.”

“Trains are inherently green so when people go by rail it’s more than a journey—it’s literally helping to save the planet!

“In future, we want trains to be the backbone of a decarbonised transport network so, as well as supporting initiatives like Community Rail Week, we want to work with  the Government to reform ticketing and fares.

“If it’s easier for people to find and buy a good value ticket, more people will use rail as a green alternative to other ways of travelling.”